Dr. Aziza Shad MD serves as the Ellen W.P. Wasserman Chair in Pediatrics and Chief, Division of Pediatrics Hematology/Oncology at The Herman & Walter Samuelson Children's Hospital at Sinai Hospital of Baltimore. However, her medical journey started many moons ago during a turbulent year in South Asia. In 1971, then seventeen-year-old Aziza was the only woman selected to attend medical school  in East Pakistan, the same year that the ongoing ethnic conflict in the region turned into a war and led to it's separation. Today it is known as Bangladesh. Fearing for her life, Aziza had to flee Bangladesh, but there were people and friends who helped her along the way to arrive safely in Pakistan. The generosity of friends, at a time of vulnerability for her, taught her lifelong lesson in empathy.

Aziza attended Dow University of Health Sciences in Pakistan. After completing two years at the college, she started wondering; “why are so many kids dying? They would all come with diarrhea and dehydration. In the midst of all that, we also had kids with cancer.” The plight of children led her to consider a career in Pediatrics.

Once Aziza started practicing medicine in Pakistan, she had the opportunity to study cancer patients and research in greater detail. She realized that there was a 50-60 % survival rate of children with curable leukemias. “In Pakistan it was 0% at that time,” said Aziza.

Inspired to change the lives of children with leukemia in Pakistan, Aziza went to England to further her training in pediatrics and cancer related ailments. Little did she know that a chance encounter in England would lead her to “Becoming American.” It was during her time in England when Aziza met her husband Tahir Shad who was a Ph.D. student at the University of Pittsburgh in the United States. 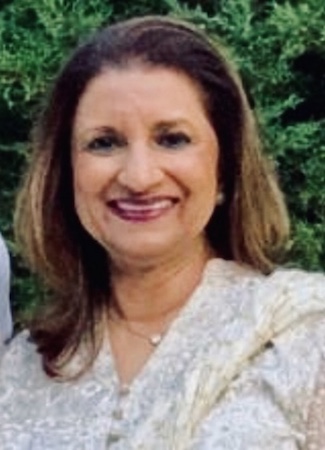 In 1985, Aziza moved to America with her husband. After a brief stay in Washington, the Shads made home in the Highland Park neighborhood of Pittsburgh. “The neighborhood we lived in was an old Italian neighborhood. We were the youngest people on the block. They were very suspicious of foreigners,” said Aziza. Eventually, the neighbors came around and ook a liking to the Pakistani couple, whom they thought of as “Middle-Eastern.” The couple’s Muslim dietary restrictions for “halal” food were not easy to understand for their Italian neighbors who shared “meatballs” with them all the time. It was in the Highland Park community where Aziza found some of her first “American” friends, many of whom were immigrants themselves. One friend taught her to dress in appropriate Western clothing, while another imparted instruction on the etiquette of eating pasta. She also met the first Jewish person in her life. “It started from eating bagels and lox together to really understanding what Judaism was all about.”

The next few years were some of the busiest of Aziza’s life. She moved to Hershey, Pennsylvania to pursue residency training in Pediatrics at Penn State Health Milton S. Hershey Medical Center. She also became a mother during this time and her first child was born with a chromosomal anomaly. “I also dealt with my own grief during those three years, “said Aziza. However, she persisted against all odds and held on to her dream of treating cancer patients.

A fellowship opportunity in Hematology/Oncology with National Institute of Health (NIH) in 1989 brought Aziza and her family to the Washington Metropolitan Area. Here she was introduced to International Oncology and had the opportunity to travel to and work in many developing countries along with the NIH Team, including Pakistan.

Today, Aziza resides in Potomac, Maryland. “Did I miss what I had left behind? Of course!” She found a way to stick to her cultural roots and “became known as the person who came in Pakistani clothes [at formal events] with a ring in her nose.” Over the years, she has served in leadership roles and top positions across several hospitals in the region. She credits the American medical system with teaching her “the value of compassion and empathy.” She keeps the goodwill going by teaching the same to her students.” Still today, I teach communicating bad news. I teach how to talk to families,” said Aziza.

Watch the attached video for Aziza’s reflections on building bridges across communities in America: