‘Becoming American’ is a series of short vignettes & videos featuring ten immigrant women who now call Maryland home. Produced by Saima Adil Sitwat, author of American Muslim: An Immigrant’s Journey, CityLit is proud to partner on this project of championing untold narratives. All installments will be posted on our NEWS section.

Nebie Zongo Sanmde Pawende Emilienne, known to people across Baltimore as Chef Emilienne, emigrated from Burkina Faso to the United States of America in 2017. U.S. Department of State’s Diversity Visa Program, commonly known as the visa lottery, paved way for her family’s residence in the United States.

Despite the official recognition of Diversity Visa Program, Emilienne’s family had to encounter harsh scrutiny and unfavorable attitude of the US immigration officers of the Trump era. It costed them several trips to the US Embassy in Burkina Faso and a few thousand dollars, that they had to borrow from friends and family. 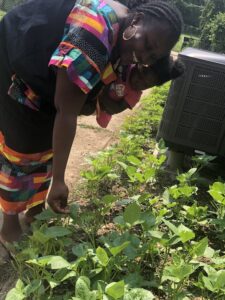 Still, Emilienne and her family persisted in the face of red tape and processing delays at the US embassy in their country. Previously, her husband had lost his job at a local hotel as the business was struck down during riots in Burkina Faso. Her own income from administrative work at a local newspaper agency was meager. The couple started a café but failed to make any profit as most customers bought food items from them on credit and seldom paid back. Their friends and family wanted to support them but did not have the financial means to do so. “My husband said we cannot give up [the prospect of the move to USA] because this is such a big hope for us,” said Emilienne.

In October 2017, Emilienne arrived in Baltimore, with her husband and their two older children who were 6 and 2 years old at that time. The couple’s third daughter, Mia, was born in Baltimore in 2019. They found a home in the city through an acquaintance. A nearby church helped provide camaraderie as well as English lessons for the French speaking family. Emilienne is proud of her partnership with Mera Kitchen Collective which allows her to bring West African flavors to Maryland. Most of the vegetables that she uses in her dishes are sourced from her backyard.

Emilienne misses her family in Burkina Faso but is grateful for the educational and professional opportunities that the United States has afforded her family. “It was like the horizon was somber” she says, while talking of her home country. “Education is hard, there is no work to be found.” She, therefore, urges the American government and people to be more receptive of immigrants, especially those fleeing hardship and persecution.

Check out the video to hear Emilienne’s story, her journey of finding friends and work in Baltimore with interpretation by Selina Doroshenko: