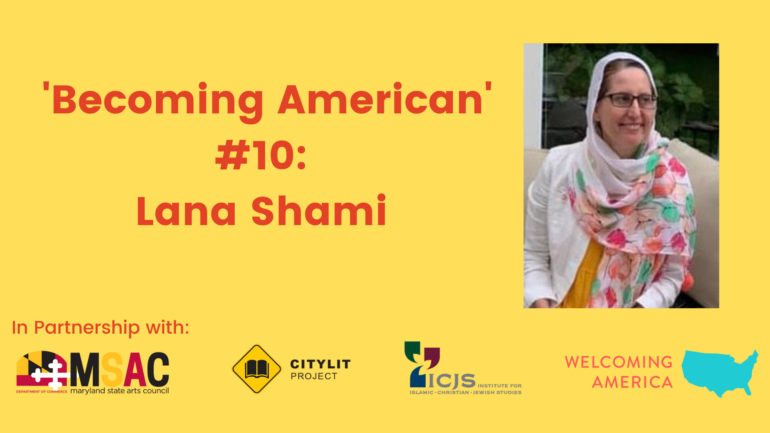 ‘Becoming American’ is a series of short vignettes & videos featuring ten immigrant women who now call Maryland home. Produced by Saima Adil Sitwat, author of American Muslim: An Immigrant’s Journey, CityLit is proud to partner on this project of championing untold narratives. All installments will be posted on our NEWS section.

Lana Shami immigrated to the United States of America from Damascus, Syria, not once but twice in her life. Her family first moved to Maryland in 1973 when Lana was 5 years old. She entered Kindergarten and learned to speak English at breakneck speed. “I was keen on losing my accent, so I won’t be identified as anything different. That’s very important as a child,” said Lana while talking about her earlier time in Md. Though Muslim by religion, the family was not devout and did not have a religious structure around them. “When we first came here, we were very dead set on assimilating,” shared Lana.

However, after spending five years in America, Lana’s father decided to move their family back to Syria, to be with her grandmother. “It was tearing her heart [her grandmother’s] to have us here, so we finally decided to go back,” said Lana. Shortly after, her grandmother passed away, and the family was back in Rockville, Maryland. after spending a few years in Syria. By this time, Lana was in 8th grade. During the following years, she completed high school and graduated from the University of Maryland and Towson State University. She married and moved to California, spent a few years in Texas, Florida and then in Pittsburgh, Pennsylvania She also divorced, remarried, and had four children. 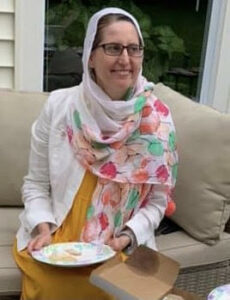 In August 2018, Lana moved back to Maryland to be close to her septuagenarian mother and the rest of her family. “We have to recreate our little families because we are so used to having extended families. It’s very precious for us to try to preserve what we can, when we can, however we can,” said Lana, while commenting on her eventual move to her home state.

As Lana moved from one place to another, she also embarked on a spiritual journey. A Buddhist roommate in college inspired Lana to undertake the discovery of her own Muslim faith, a religion that she was born into but hadn’t practiced until then. In 1996, when Lana was newly divorced from her first husband, she established friendships with other Muslim women, who helped her on this path of self-discovery. Initially, it was hard for Lana to start covering her head like many practicing Muslim women. The September 11th attacks changed that. “The time when I decided to go on and put on a hijab was in 2001, after 9/11. I felt like everybody had abandoned Islam and I wanted to show the people around me that we are not the terrorists that they make us out to be,” said Lana. She also realized that her mannerism had to change, and she had to make an effort to be extra pleasant to people around her, when she had her scarf on. Speaking of her practice of taking headscarf and how it is received, Lana said: “I think I became really self-conscious about it [the headscarf].  Sometimes you can clearly tell that people are ruder when you have a hijab on, as if we are less entitled to exist than they are. But then, I have noticed in general that if you are wearing a hijab and you are smiling and friendly to everyone, everyone is friendly and smiley and nice to you. But we can’t always put on that front. I have to make that extra effort when I have the hijab on.”

See Lana’s speech made in Mount Lebanon, PA in 2018, on the importance of “standing united”: