IN THE NEWS
While the literary community mourns the recent passing of poet Charles Simic and novelist Russel Banks, it becomes ‘personal’ when the loss is a young, Baltimore poet whose words, presence, and grace will be sorely missed but well remembered. Our hope is the collected testimonials from members of our literary community who grew to love and appreciate Mandy May offers solace to their loved ones. We believe “When someone you love becomes a memory, that memory becomes a treasure.”
Mandy May, you will rest in our hearts forever and a day, for all you did …  for all you gave. – Carla Dupree
A Community Eulogy written with love from Mandy’s writing community: Contributions from Sylvia Fischbach-Braden, mychael zulauf, Amanda McCormick, Tyler Mendelsohn, Tracy Dimond, Ann Marie Brokmeier, Anonymous, Andrew Klein, Sharea Harris, & Tonee Moll:

What I remember from school—her style: cute vintage dresses, twin-set cardigans, palette hair, the color peach. Her ready smile, her pixie smile. Her glasses, her bruises. Her aura! Her energy! Her magic!

Sitting at the work table with her in Plork Press bookbinding sessions.

Her skills extending in every direction.

Mandy’s poems: so idiosyncratic, so personal, so sensual, so new, so unsettling; such images, such sounds, grabbing you like tendrils, like tentacles. Each one brought to workshop, a palpating, glowing gift.

And more recently, on Facebook—posts about the progress of her doctoral program. Photos of Mandy relaxing with her much-loved family; her cherished cats, her plant collection, her intricate
macrame. 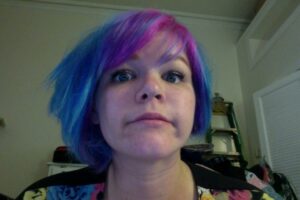 when the moon looks at her reflection, she sees Mandy: always a second helping of light above the trees, in the middle of a bruised sky, always skyward, always luminous

i know Mandy was brilliant in many other avenues (in her magic, her body advocacy, her PhD work), but i will always think of her in the context of poetry. she could wield and transmute the very elemental core of language; she could make it shimmer and sing like she shimmered and sang

i don’t know where she’s gone off to now, but i know wherever it is, we must look up to see it

Part of the mysterious nature of Mandy is that she thrived at night. It goes without saying that if Mandy were to attend a 1pm service, they probably would show up late.

Mandy was one of the few people in the world that I feel truly saw me. They were -by far- one of my biggest supporters, especially when I made the transition from IPP to Former Housewife. Mandy was
there for people in the sincerest ways. She showed up not because of what you could do for her, but because of the potential of what you could do for yourself.

I admired her and her writing + art so much, and when I think about my business and my art and contemplate, “who is this for?” Mandy is one of the top people I think of.

When I started struggling with my chronic illnesses and I was afraid, Mandy emailed me a list of doctors and explained how I might approach my health like a crusade. She was always willing to have the hard conversations and we could disagree while staying on the “same side.”

Last week, I was going through brown paper bags that someone else donated to me to repurpose,
and Mandy’s name was written on one of them. I think it was from when she submitted to the
creative scavenger hunt at The Woods. It just shows how connected she was.

Since I found out Mandy died, I’ve been thinking about when we first became friends. We had known each other about a year, but she was living in the apartment building next to mine when I had a breakup, and when I told her about it, she said without hesitation, “I’m coming over.” At that point we didn’t know each other very well, but it was the start of one of the most important friendships of my life.

I later learned that this was always the case with Mandy. When I was newly sober and texted them that I was in my house freaking out, they said, “I’m coming over.” When I had a giant cockroach in my apartment and texted them to complain about it, they said, “I’m coming over (with Babe).” Babe didn’t end up doing anything, but at the last minute—as the cockroach, who we later named Norman, was running up the wall—Mandy picked up a huge book of queer poetry from my shelf and threw it at Norman, ending his reign of terror.

Mandy loved so hard. When something exciting happened in my life, they would say, “Dr. W [their therapist] is excited too!” When a song I loved came on at a dance party, they’d find me on the dance floor. Even when they recently texted me, apropos of nothing, “Is there anyone you want me to put an ancient Balkan curse on?”, it was out of love.

Mandy had so much feeling and quiet fire, which they captured so well in their poems, or held back when they thought it was necessary. She had so much intention and mastery in her poems, and—as I’ve been thinking about since she died—in her life, too.

I think about how we could talk about chronic illness in abbreviated ways, sometimes just a head nod, knowing how much the other person understands.

I think about the Kesha song Spaceship, and how Mandy too was always a Warrior in Lisa Frank colors.

I think about circus arts and how they glittered on a moon-hoop.

I think about first meeting her, how cool she was, and other people in the poetry workshop in 2013, and being over the moon as our friendship blossomed.

I think about one person as the audience when I write, and I would often write for their approval.

I am going to be looking for magic-bruised-peach-fruit often. 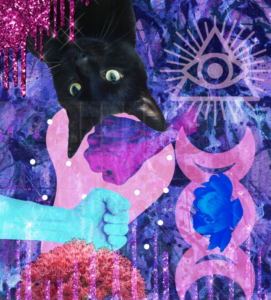 Mandy was such a light. She was kind, compassionate, thoughtful, loving, creative, welcoming, talented. The last time I saw them, it was through a crowd and I was led to her and our friends by her
bright hair color. We laughed and danced in a group as we celebrated Tyler’s birthday. Celebrated life. Celebrated our bodies. Celebrated dancing itself. Mandy was a person who you wanted to celebrate with, a person who you wanted to celebrate. I will forever celebrate their life and our friendship. I will forever dance in their memory. Thank you Mandy, for being who you were in my life and who you were in the lives of so many others.

Mandy was such a loving friend. She was so understanding and creative and sarcastic and adorable and smart and authentic.

I’m so glad I met her, even though it hurts to think about her. 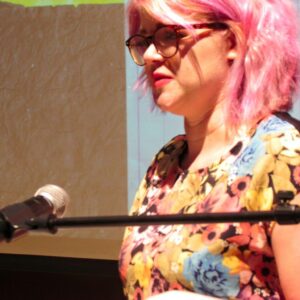 Mandy and I were in the same poetry cohort in the UB MFA program, and she was a huge part of what made that time as life-changing as it was. I do not know what my writing and art would look like had I never had the chance to create alongside her. Mandy knew more than most how deep
language could yet go, how it could offer embodied truth. She was constantly looking inward, at the gut and spiritual level. In writing and in life, hers was a poetics of vulnerable exploration and seismic attitude.

She was a poet’s poet, a loving, searching soul, kind and incisive. And still a badass with a hard-won edge. She saw as deeply as she wrote. Her poetry was so often a restating of the body’s incalculable strangeness and wonder, joy and despair. She knew of and spoke to pain, to hurt, to breaking. A moon cast over the unending ocean. To those places she brought fierce love, she sowed fire, she reanimated the flesh.

Mandy is in the mycelial core of many of us lucky enough to have written alongside her. Her presence and transformative poetics run like wildflowers through our hearts. I miss her beyond where language needs to go, but I’ll find her in our poems and essays and stories as easily as I will the moon.

Mandy had a mouth like coals; had a heart of sweet sopping pomegranate; could carry a grudge threadbare; raged rabid for her friends and fought hard, damn hard for her life.

scorpio stelleum sister; fire faced women with hearts
stars in natal charts and fingers full of perfume. I don’t wanna think about it hard, I just want to bask in the sweet of you.

In a final manuscript of poems that Mandy finished before she went, one she was sending around in her final days, there’s a poem that considers her legacy. It’s more beautiful and heartbreaking than one can imagine now that she is gone, but it has beautiful instructions for us today, words on how she’d like to be remembered. This is a small excerpt:

I want people to think that I said what I meant and I meant what I said
because I did.

I want people to think that I bled dry for those I love even though my tone was flat.

When my breath vacates my chest and my skin settles into the earth,
I want the world to take my exhale as champagne in a plastic
magenta chalice from Target clearance.


If you’d like to read her official Eulogy, you can here.